In comparison to the other EPIK teachers we met, we lived in one of the most militarised towns in Korea. We were 15km south of the border in Yeoncehon, Gyeonggi-do and there were numerous army bases including the U.S. Army’s Camp Casey in the surrounding area. It wasn’t uncommon for us to have a row of tanks roll past, Blackhawk helicopters hovering above or the sounds of the artillery rumbling in the distance (read more about our borderlife here).

We originally planned for our friends to come up and stay at the campgrounds along the river once summer had started, however, those plans were postponed when we received SMS alerts telling us to be aware of unexploded landmines in the river that could have washed down from the DMZ after a downfall of rain. In hindsight, perhaps a slight overreaction. As it turned out, the cabins also book out super quickly!

A new plan was made and about 2 months later in August, we had about 8 friends come to visit the 5 of us based in Jeongok. After looking online for things to do while our friends were there, we found that there was a waterfall – Jaein Falls (재인폭포) – that was pretty close to the town and added it to our list of things to do.

Car/taxi is the best way to get to Jaein Falls from Jeongok, as the bus does leave you with a bit of a trek to get there.

Jaein waterfall stands at 18.5m tall and is a result of volcanic activity thousands of years ago. After the summer, as it turns out, you are able to go down the ladder to the mouth of the falls and this time around, there was not a drop of water to be found!

Okay, so there was a tiny bit of water as the rocks were a little damp. Still, not quite what we were expecting. 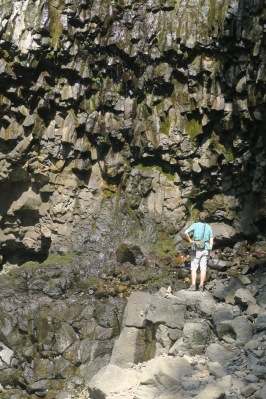 The last of the water

There is a glass platform you can view the waterfall from when there is water flowing and the stairs are closed. My co-teacher went to go check it out later in the year (about a month later) and sent me the below photos – hard to believe they’re of the same place! 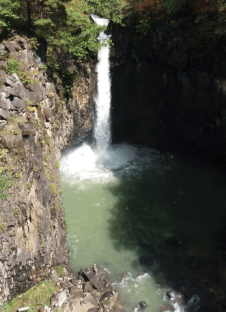 I have read that the falls freeze over winter as well, so there a few different forms you can see them in.

So we have 2 tips for trips to Jaein Falls in Yeoncheon:

Written by Sarah + Chris. Photos by us + Kim Dahye.