On our super long trek from Perth to Milan, with three stops along the way, the longest stopover was in Hong Kong. We landed around 9.30am and headed straight out of the airport for some quick adventures.

We have been to Hong Kong a few times, so we have had a decent look around over the years. Despite this, we haven’t spent much time on Hong Kong Island itself, with most of our time spent in the New Territories. To rectify this, we planned to go and check Victoria Peak and the area around Hong Kong Station out.

We decided to take the airport express train – we usually take the airport bus in HK – but with a same-day return train ticket equal to the price of a ticket one way we opted for the faster mode this time. You can use your Oyster card (HK$105), or but a paper ticket (HK$110) for around AUD$1 more. The train also had charging points and free wifi for an hour which was handy.

The best and fastest way up Victoria peak is via the historic tram that takes a steep path the up the side of the mountain, this was an experience in itself. The lines for the tram can be massive, especially on the weekends. We had read about this beforehand and found a website that offered to purchase the tickets for the tram both ways and also entry to the rooftop sky terrace at the top of Victoria peak. This ticket also allowed a priority pass for the line for the tram, which we estimated saved us around at least a two hour wait. 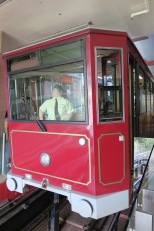 We had about a 20 minute wait to board the tram. The tram ride itself only takes about 10 minutes and the views are spectacular! Once we arrived at the peak, the building with the sky top terrace has a few levels of restaurants and gift stores and also a photo area for the trick photos where you can get the cheesy ‘I’m hanging out of the tram’ photo.

The views from the top were spectacular, even with the haze. You get quite a clear view of Victoria Harbour, the buildings on the island and around the peak and also the new territories.

The tram ride back was much the same as the ride up, apart from sitting in the opposite direction of the way the tram was traveling. With some of the parts being quite steep, it was pretty cool.

Next trick was finding somewhere for lunch. Unfortunately we hadn’t pre-planned this part too well and wandered around for a while on the island and eventually found a little lunch spot where a lot of the local workers went. We had to wing it a bit as there was no English menu, and we ended up ordering a pork cutlet with delicious potato curry, and roast pork with rice, which was all devoured in haste! 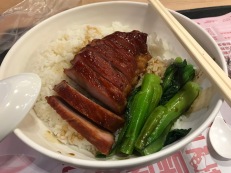 We did a spot of convenience store shopping on the way back to the train station, and before we knew it, it was time to head back to the airport. 8 hours done; and much better than airport hangs.

NOTE: HK Airport has a left baggage facility on Level 3 of Terminal 2, just a short walk from the train station. It costs HK$12/hour.

There was an error retrieving images from Instagram. An attempt will be remade in a few minutes.