So getting used to a new country was always going to have its challenges. Like getting used to a keyboard where the buttons either side of the spacebar change the letters from Korean to English and for some reason, I seem to hit them ALL the time!  We were told numerous times at orientation what to expect when culture shock hits us and many explanations about what differences to expect between our old and new worlds.

One thing I wish they could have given us a heads up on, or maybe just those who were placed up in the far north of the country (i.e. the Jeongok peeps), was what to expect living close to the border.

Technically, Chris and I are based 17km south of the border and it seems Yeoncheon County, and in particular, Jeongok, where we live, has many South Korean army bases and their many oh so bored conscripts surrounding the town. All South Korean men who are fit and able to, are conscripted to around 2 years national service. National service, as we have found, also can include working with the police and we have also met someone who went to south-east Asia to teach taekwondo.

Our schools are particularly close to the Rodriguez live fire range (we discovered the name from the location option on Instagram). It is weird for us not to hear artillery fire all day, which was not something I was excepting to have in the background whilst teaching crazy 6-year-olds.

My second school has 3 army bases surrounding it and a number of army kids. As it turns out, the school has a great relationship with the bases and the army guys will regularly come and help at the school, such as help set up for events. They recently also organised for all the conscripts in the area who had backgrounds in art to come and paint murals on the new wall that was built not so long ago. The grade 6s also had a chance to go out and help them. 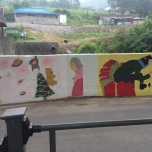 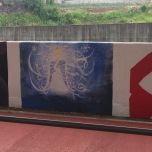 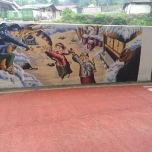 We also recently had two very different experiences with our school’s preparedness training in case the north attacks. My main school and Chris’ school share an underground bunker and the kids got to practice walking down to the shelter and had some demonstrations. The reasons why it was so different for us was because Chris was able to go walk down with his school, while mine said: “no, you just stay at your desk”. Lucky Chris knows where it is!

Chris reported that the bunker was ‘quite nice’: a well-appointed space with very modern stylings. His colleagues were very surprised by his excitement, it was his first bomb shelter, and his intrigue in the thickness of the solid blast door. So while it takes a while to get used to seeing black hawks flying above us and tanks rolling past (like, just driving down the road, which we’re pretty sure that’s why the road was resurfaced a week later), our little town does have to cater for all the people and therefore has close to a million places to eat. 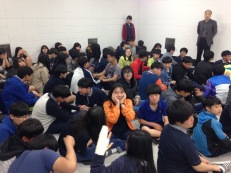 And with Camp Casey (large American base) just a few train stops away (plus a bus to get to the train), we can if need to get a good fix of western food. We are yet to venture there just yet.

So #borderlife isn’t as scary as it sounds, it just took some extra getting used to. And I guess you can always look at it as a whole lot of bonus protection for us!

P.s. The missiles will probably overshoot as supreme leader Kim is probably aiming for Seoul 😉😉

One response to “The joys of #borderlife”