I ended up leaving Korea earlier than anticipated, due to health reasons. My immune system didn’t stack up to the air quality and continuous colds I picked up combined with my asthma eventually led me down the path to shingles and overwhelming exhaustion. We came to the decision that before winter set in that I would end my contract early and go back home to Australia.

Chris had his winter leave coming up in January and we decided I would come and join him for his break. Chris decided he wanted to surprise me as to where we were going to go for a couple of days and gave me a bunch of clues that led me to believe that we were going to a tropical paradise. Oh, how wrong I was!

Not quite the warm weather I was expecting

To be fair, the picture Chris sent me was the view from our hotel in the summertime, looking over the coast. So whilst, yes we did end up going somewhere warmer than Yeoncheon (as it turned out, not hard to do), it was only to a couple degrees warmer in Jeju-do. Our first trip to Jeju was in the middle of sweltering summer (read about it here) and there was a lot we didn’t get to see, as the public transport wasn’t as widespread + time efficient as compared to the mainland.

Our first task after landing was picking up the hire car that Chris had booked. There is a huge range of hire car companies in Jeju, but most are focused on Korean and Chinese tourists. We found that it was cheaper, probably due to our (lack of) Korean skills, to book through one of the bigger international brands on their international website. Chris picked up his international drivers’ licence on a quick trip home for a friends’ wedding from a travel agent as it’s the only way you can hire a car in South Korea. Once we picked up the car and got the seat heaters cranked, away we went!

Tip #1: You can search for addresses via phone number! Much easier than typing the address in when Hungul isn’t your thing.

We smashed out a heap of different attractions in the 4 days we had. Below is a small summary of each of the different spots:

Located at one of the most eastern tips of Jeju, and the set of a famous scene from the KDrama Orange Marmalade is the Bangdupo. This lighthouse is located at the end of a small cape and is heavily exposed to the elements, so it was freezing in winter. The area has become a tourism site, featuring wonders like the Zippo Lighter Museum.

Also known as Sunrise Peak, Seongsan Ilchulbong is a UNESCO World Heritage Site and a dormant volcano, located at the most eastern point of Jeju. Many people choose to make the 30-minute climb in the early hours to watch the sunrise (we are not those people). You’ll need a medium level of fitness to make the climb. A little tourist district has developed at the base with your usual Korean fare for your post climb snacks. 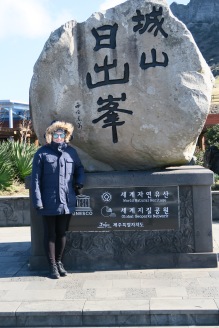 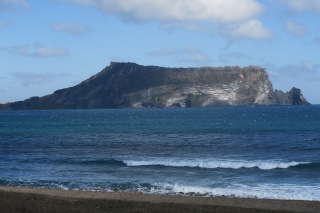 Another must do in Jeju! There is a 1km section that you can explore of the 13km long tunnel made by volcanic lava.  This UNESCO world heritage site has to be seen to believe and our photos really don’t do it justice. The walk itself can be a little uneven and slippery, so a decent pair of shoes helps. Manjanggul is accessible by bus. 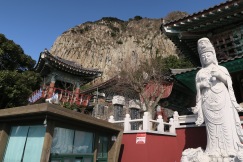 Compared to the other temples we had visited throughout Korea, Sanbanggulsa was fairly quiet on the tourist front.  It is based on the side of Sanbanggulsa mountain and the views of the coast are pretty great.

Up the cliffside from the temple, is Sanbanggulsa cave which has been made into a temple with a Buddhist statue inside. It is a bit of a trek up the stairs, with some parts being quite steep but there are some little stalls on the way up where you can get water and orange juice. The ocean views were pretty amazing. It takes about 20 minutes to get up to the top.

Unintentionally, we visited another Kdrama location from the show Daejangguem. Oedolgae rock stands at 20m high and there are a few different lookouts around the coast. The legend of Oedolgae is of a beautiful wife praying for her loving husband who has gone missing whilst fishing. Again, there were a few stalls around selling drinks, snacks and oranges.

A trip to Jeju definitely needs a trip to one of the many different theme parks. Talking Chris into going to a theme park was hard enough so Loveland was super unlikely, so a miniature landmarks theme park was a great compromise. The park itself needs some maintenance but was still a heap of fun. The only downside was one of the two Australian buildings, the Sydney Centrepoint tower had lost the actual tower part of the statue and took us a while to figure it out. 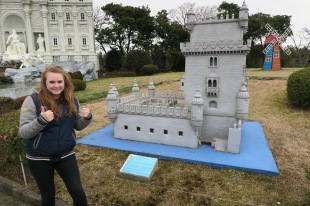 Based in a resort, we were keen for some fine dining. All the courses were super delicious. 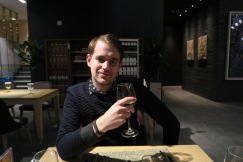 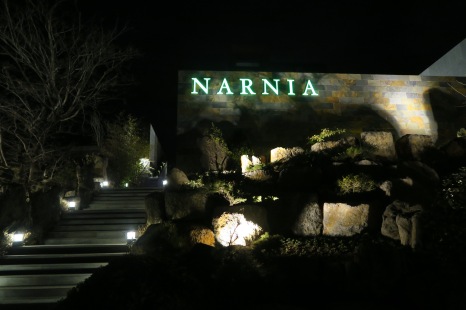 Anthracite is probably one of the more famous cafes in Korea, featuring on pretty much every variety show that films in Jeju. It is set up in an old factory, with old factory parts and plants and weeds growing inside. The tables made from old trees which had been growing inside. another shop in Hapjeong in Seoul.

Cafe TaeHee came highly rated and it didn’t disappoint. Set by the seaside, this small unimposing shop hides some deliciousness inside. The food was by far the best fish and chips we had in Korea and possibly ever. They also have a wide range of beers.

Jerry’s was a cosy little pub just was around the corner from our hotel. A great place to spend a cold evening in with a few beers and a game of connect4 or two. Hot tip: try the black pork schnitzel! 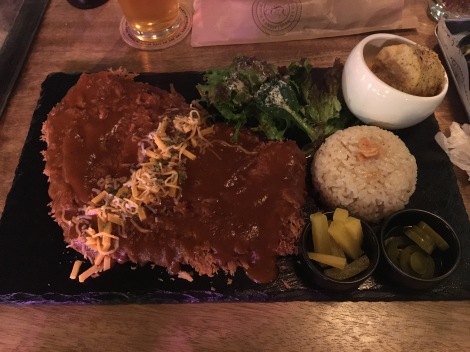 *we have heard the public transport has had a revamp since we’ve been so visiting a few of these places may be easier!