Jeju-do (Jeju island) is a must do destination to check out if you’re ever heading to that part of the world. Often called Korea’s ‘honeymoon’ island, it offers a glimpse of the Korea of old, mixed with some of the most cringe-worthy (Chris’ opinion) tourist attractions one could ever imagine.

Our town in northern South Korea was in the middle of a 2-month heatwave, so we thought the trip was well timed. Jeju is to the south, it must be cooler there, we thought.

How wrong we were, how very, very wrong. Not only was it hotter in Jeju, the humidity was about 500% higher. In light of the heat we made a strategic decision to include water in our journey as much as possible, that turned into a quest to go chasing waterfalls.

Like most people, we flew into Jeju from Gimpo Airport in Seoul. In peak times there are flights between the two cities every 10 minutes or so. Tickets if bought early can be as little as $10 to $20, and most tickets include at least 15kg of baggage. Jeju Airport is in Jeju City, in the north of the island. For this trip, we didn’t hire a car, but if you do the airport is the place to pick it up from.

For this trip, we stayed on the south side of the island, in Seogwipo. Seogwipo is the 2nd largest city on the island. Note, the entire south half of the island is called Seogwipo, with the main town in the middle of the coast. We tossed up for a while which side to stay on due to the lack of car, and ended up choosing a part of Seogwipo near their World Cup stadium, for the proximity to waterfalls, reasonable east-west bus routes, and our friend, Erin. 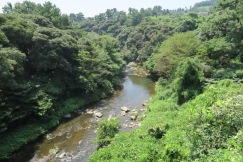 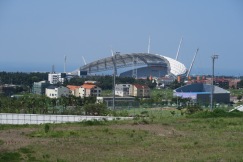 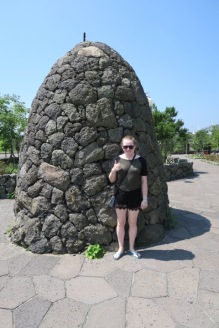 Jeju is a bit different to mainland Korea with regards to getting around. To get around to all the activities (of which there are millions), having a car makes a huge difference. The activities are really spread out often distant from main roads. To rent a car you require either a Korean or an international drivers license, which neither of us had this time around. Therefore our methods of transport were walking (until we were sweated out), the occasional taxis, and the local/intercity buses when they sparingly showed. This meant we had to properly research how to get to where we wanted to go and plan our day out instead of our normal ‘figure it out as we go along’ method.

Cheonjiyeon Falls was the first on the list. The name translates to ‘sky connected with land’ as it looks like the waterfall comes from the sky. Cheonjiyeon is walking distance from Seogwipo City. 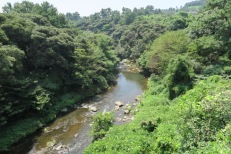 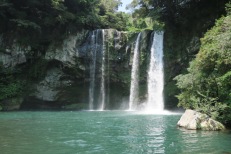 Jeongbang Falls were a must on the waterfall checklist as it is the only waterfall in Asia that directly falls into the ocean. This was our second pitstop of the day and how refreshing it was! You can climb down to the mouth and stand between the waterfall and the ocean. You’ll find plenty of people here cooling off if you come in the summertime. 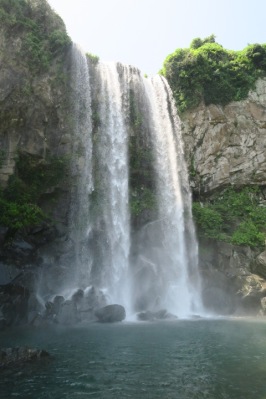 Sojeongbang Waterfall 300 metres east of Jeongbang Falls. When we were there a number of Korean women were sitting beneath the waterfall. Although we are unsure about the purpose or symbolism of this act, it appeared to have something to do with the power of the waterfall on their bodies. Chris saw this as an opportunity to cool off after a long walk. 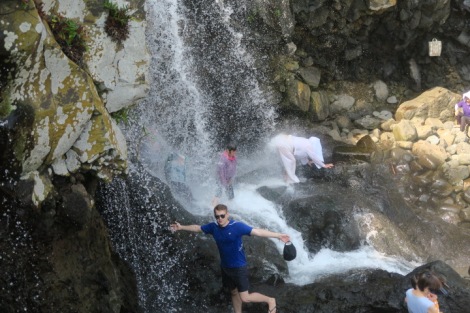 Cheonjeyeon Falls was the last of our waterfall chasing – almost the same as the first, just without an extra ji! 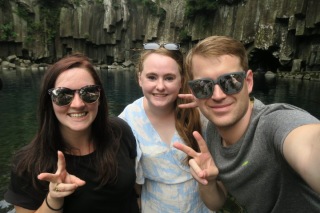 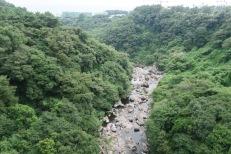 Chasing waterfalls was not the only thing we did in Jeju-do, as another must do (for KBBQ lovers especially) is trying the speciality Jeju black pork. There are plenty of restaurants that offer this speciality, which comes with the extra cost as well. We would definitely recommend if you’re not on a strict budget. There is also a Jeju black pork street (not too dissimilar to the dakgalbi street in Chuncheon) in Jeju city.

Photos are taken by us! Written by Sarah