No trip to South Korea is complete without at least one visit to a ‘themed’ cafe. Luckily, the Korean entrepreneurial spirit, and what I can only assume is lax intellectual property laws, ensure a rich vein of these right across the country. Korean cafe culture is intense, and competition even more so, the need to differentiate your business from the competition is clear. 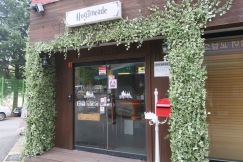 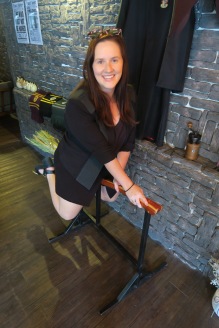 Tucked away on the outskirts of Korea’s fourth-largest city, Daegu is every muggles dream come true. Hogsmeade cafe offers Potterheads the opportunity to immerse themselves in the world they so dearly love while taking ‘insta’ worthy shots that are sure to make all their friends as jealous as Ron Weasley sporting Slytherin’s Locket.

Hogsmeade’s dungeon setting is exquisitely and tactfully executed, the tendency for themed cafes to “overdo it” has luckily been resisted here. Harry Potter memorabilia is cleverly located throughout, offering multiple photo opportunities. The cafe has wizard robes and scarves of all four Hogwarts’ Houses available for customers to wear. Stand in front of an ornamental fireplace with the Sorting Hat, or mount the broomstick for that mandatory quidditch action shot. 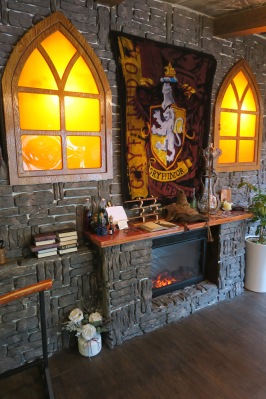 Secluded area at the back of the cafe

What’s on the menu

Butter Beer.  Yes, I know this isn’t the Three Broomsticks, but that most famous Harry Potter ale is available at Hogsmeade. It’s not likely to have you under the table, but an addiction to the stuff on the scale of Winky the house-elf is more than a slight possibility.

The remainder of the menu is quite typical Korean cafe fare, though the cakes are beautifully presented and the milkshakes go above and beyond! As with other themed cafes, the prices will set you back a little more than the typical coffee or cake.

Cake presentation is well above standard 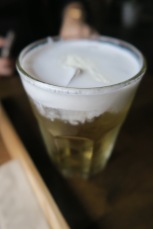 They take milkshakes to the next level

Overall our visit to Hogsmeade was fantastic, we spent a bit over an hour there taking photos, enjoying our food and drinks, and taking in the wonders of the setting. The staff are very accommodating of customers taking photos and enjoying the cafe’s Potter paraphernalia. Make sure you pop by on your next visit to Daegu!

How to get there

We arrived in Daegu at Dongdaegu Station on the KTX from Seoul.

From Gyeongsan Train Station: If you are catching the KTX from Seoul or Busan your train will almost certainly not stop at Gyeongsan Station. You will need to get off Dongdaegu Station (East-Daegu Station) and transfer to a slower train. Hogsmeade is a short 5-minute walk away from the western exit of Gyeongsan. See the map below.

From Dongdaegu Stn: Walk to the front of the station and catch bus number 399 or 909 and get off at 서부1동주민센터(경산역) Gyeongsan Station. The bus trip should take about 50 minutes. Then walk the 5 minutes to Hogsmeade. see the map below.

By Taxi: Show the driver the following address (경상북도 경산시 성암로12길 36-11). Ask them to put it into their GPS.

A taxi is a good option for those unfamiliar with Korean buses and trains, or in larger groups. Note the ride may get expensive as Hogsmeade is outside the Daegu city limits and an ‘out of city’ taxi surcharges may be applied to your fare.