Nestled on the slopes of Naksan (Nak Mountain or Camel Mountain) is one of the few remaining traditional neighbourhoods left in Seoul. These hillside villages, most lost to rampant development, called ‘dal dongnae’ (moon villages), are little gems into Seoul’s recent past. These areas were, until recently, largely forgotten and ignored by the ‘powers that be’.

The amazing little neighbourhood of Ihwa-dong is one of these ‘moon villages’. Ihwa-dong has been subject to an amazing transformation over the past few years. The Seoul Metropolitan Government has been working here and other areas to turn around the perception of these areas. As part of a project called ‘ART in the City 2006’ over 60 murals has been painted across Ihwa-dong; designed to bring in tourist dollars to the area while beautifying the area at the same time. It has seen a real change to the area without the mass displacement of the generally low-income residents. The area is now generally known as the Ihwa Mural Village.

Those that arrive by Subway (Hyehwa Stn, Exit 2) will find themselves in the rather trendy and hip area of Daehangno (college street). The area is packed with uni students, bars, cafes and a great independent theatre scene. We spent a bit of time looking in a few shops and then as we were about to grab some lunch, we ran into some EPIK friends of ours, Michael and Grace. 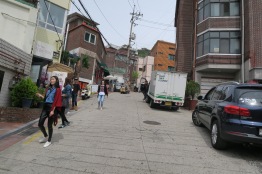 It is at this stage that I must stop the riveting blog post on hill climbing and murals to bring to your attention some delicious food which fueled our journey up the mountain. Needless to say, that we have not had a real wood-fired pizza in over 2 months, let alone real cheese. So when our friends suggested with glowing reviews a local place called ‘Di Matteo’ we were there in no time!

Although not the best pizza we have ever had, we didn’t care… ’cause it was actual pizza! Cooked by an Italian nonetheless. We wouldn’t recommend it for someone visiting Seoul (You have better pizza where you are from), but for the much-starved expat; get there now!!!

We rolled out fully stuffed and began our ascent of the hill. The hardest climb is at the bottom, slogging up quite steep inclines and a few pretty intense stair climbs. After a kilometre or so you are met by a stunning view of Seoul, sweeping views of downtown Seoul and the mountains in the distance. The view is also the first sighting of the mural and public art that make this area an attraction 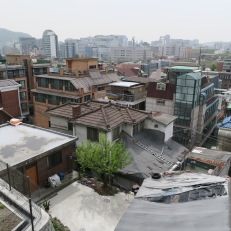 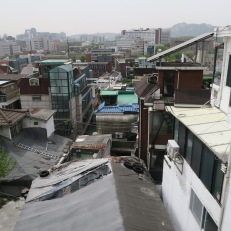 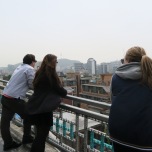 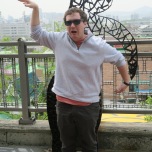 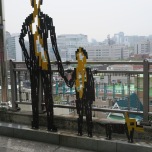 The hill and village reminded me of Alfama and other parts of old pre-earthquake Lisbon. Tight streets, small intimate cafes in old houses and an almost shanty town fee at times. This is definitely a Seoul of yesteryear. The place is reminiscent of a time when Seoul developed quickly, space was at a premium and rules limited at best.

Sadly these places are becoming harder to find in Seoul as the soulless architecture of mass apartment complexes dominate more of the skyline. Hopefully, places like this can be preserved so people can experience what Seoul is really like and what really makes it special.

Below is a sample of some more views and also many of the murals. There are 60 murals in total, we didn’t see them all as we would have needed to go back up the hill to do that. Clearly, that wasn’t going to happen! 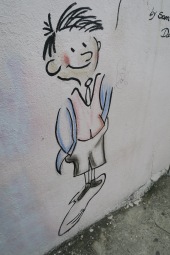